The Marrakesh E-Prix witnessed a stellar fight at the front of the field between Sebastien Buemi’s pole position sitting Renault, Sam Bird’s DS Virgin car and Mahindra Racing’s Felix Rosenqvist. The Swedish racing driver made an error on his super-pole qualifying lap which probably cost him three points. They pulled away from the rest of the pack. Meanwhile, after a strong opening lap, Nick Heidfeld was already fighting on the fringes of the top ten. Felix made his move on Bird just before the halfway mark in the race. He immediately started to apply some real pressure on Buemi’s Renault.

A slow pit-stop saw the Mahindra driver lose some ground to the Swiss leader. But the Swede reeled his adversary in before pouncing with a well-executed move with just 4 laps to go. Buemi had no reply and Felix brought his car home for a popular and thoroughly deserved win, his second in succession to take the championship lead for the first time. Meanwhile, Nick emerged from a frantic scrap for the points-paying positions, crossing the line in a superb 8th position (later elevated to 7th after a time penalty was applied to Maro Engel of Venturi). Nick’s battered car faced stiff competition during the heat of the battle, but the car was strong enough and the driver brave enough to complete a great result for the team after a rare mistake in qualifying saw Nick start 18th.

Mahindra now heads to South America and the first ever E-Prix in Santiago next month with a 17-point cushion over nearest rivals DS Virgin Racing (the first Indian team to ever lead an FIA championship) and Felix will take a 4-point advantage over his pursuers to the Chilean capital in three weeks’ time. Nick Heidfeld is 7th in the drivers’ championship.

“I’m happy that our unfinished business from that last season in Marrakesh is now done. We can close this chapter and move forward. It’s extremely exciting to be on new territory for us, leading both championships! It’s only going to keep motivating the team more and more, and it’s something we need to maintain and be consistent with until the end of the year.” 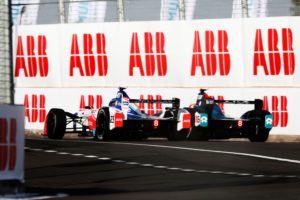 “It was an eventful race and was tough driving out there. My car was quite damaged, due to my qualifying crash. I was able to overtake some cars on the start lap, and later on in the race, though I was overtaken, I managed to get my positions back again. I crossed the line 8th but gained a position due to Maro Engel’s penalty that he received for crashing into me. The aim was to finish strongly and keep the car in one piece while not doing anything risky.” 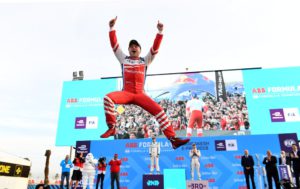 “It was a day of teamwork, showing that every person in this team has put their best effort in. It was a crazy weekend with pitstop times being reduced and having to change the battery on my car just before the race. Free practice was a mess, qualifying was a bit of a scare, and nothing was really clear all day until the race itself and right after the pitstop. I started feeling more confident, and slowly being a more established Formula E driver, I’m learning how to manage a race. Being a race about energy, I was able to keep my calm, be efficient. My engineer told me what to look out for, and I was able to get there in the end. It’s great how we turned it around, ended up on the top step. We’re celebrating it because I honestly didn’t expect it in Free Practice 1.”

? What a weekend! @FRosenqvist moves to the top of the driver standings. And our lead grows in the overall standings. #passioneering pic.twitter.com/noydW3B0A1

I am going to give it my all in Australia, Tanak says

Volkswagen Motorsport concentrates on development of the Polo R5