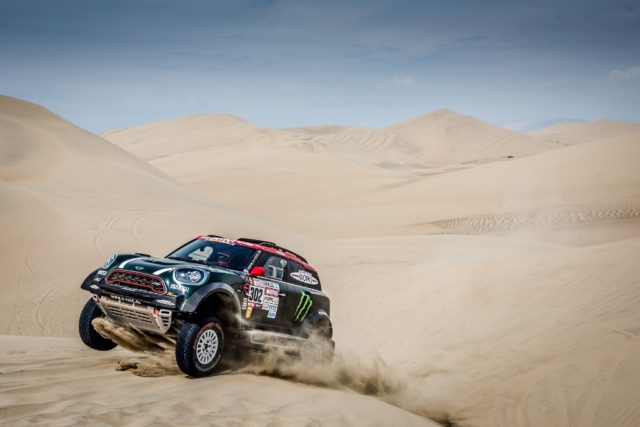 Nani Roma retired from Dakar 2018 after a crash in the third stage of the race.

Roma and co-pilot Alex Haro looked to be certain of a top-five finish in Stage 3. Unfortunately, with approximately one kilometre left of the off-road special stage, they rolled their MINI John Cooper Works Rally. The pair managed to finish the special stage. But before completing the liaison stage the medical crew took Roma to hospital for precautionary medical checks. The end result is the crew cannot now continue Dakar 2018. The organizers confirmed it today.

From the other MINI drivers, Orlando Terranova is best placed after three stages in the overall classification – eighth. Jakub Przygonski is 11th, while Mikko Hirvonen occupies 20th.

Hirvonen had started to push hard and was on course for another top ten stage result. But midway through the special stage he hit deep sand and became stuck. The outcome of this was completing the stage in 39th.

“We slid sideways into a dune, couldn’t move forwards, backwards or sideways and had to spend time digging to get the spare wheels underneath the car. We lost a lot of time. It’s a shame but that’s how it is”, Hirvonen said.

Handling the Heat in Malaysia