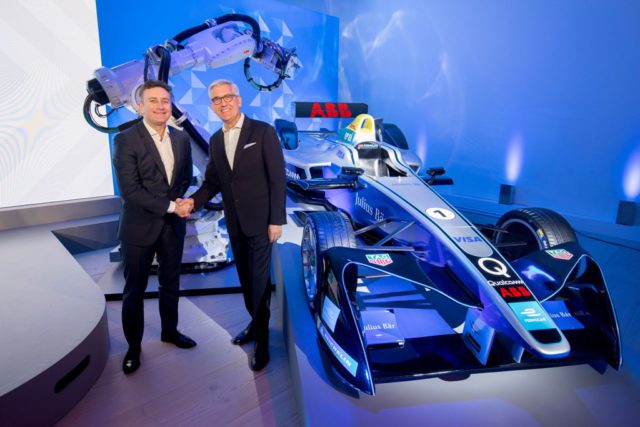 ABB joins Formula E as title partner of the electric street racing series in a multi-year deal. It is not only a first of its kind for Formula E but also the first time an FIA-sanctioned single-seater championship has had a title sponsor. The new partnership emphasizes the position of Formula E as a key place to be for forward-thinking brands and manufacturers.

Alejandro Agag and ABB CEO Ulrich Spiesshofer made the announcement at the Saatchi Gallery in London. They also revealed a new brand identity for the championship.

Formula E and ABB share the same vision of a future where electric mobility is the preferred form of transportation. Both companies are at the forefront of the Energy Revolution. Formula E is the heart of electric motorsport and helps in emphasizing the increased uptake of electric vehicles worldwide. Meanwhile, ABB helps its customers in utility, industry, transport and infrastructure to realise the benefits of industrial digitalisation.

“This is a historic day for Formula E. Our two companies are synonymous with pushing the boundaries of what is possible. Together, as partners, we will showcase break-through technology on a global scale to fans and consumers who follow the ABB FIA Formula E Championship.”

“We are extremely excited to partner with Formula E in writing the future of e-mobility. Today, two pioneers are uniting. ABB and Formula E are a natural fit at the forefront of the latest electrification and digital technologies. Together, we will write the next phase of this exciting sports activity and foster high-performance teams. Together, we will write the future – one electrifying race at a time.”

“Formula E continues to grow and in addition to its sporting and technical success, the tremendous level of excitement surrounding this new FIA discipline is tangible. Today’s ABB announcement as the title partner is a strong sign and proof of the attractiveness of this championship, which is still in its infancy. The mobilisation of major economic powers around the pillars of this discipline is a very good sign. This contributes to the development and expansion of Formula E.”

ABB is a pioneering technology leader in electrification products, robotics and motion, industrial automation and power grids, serving customers in utilities, industry and transport & infrastructure globally. Continuing a more than 125-year history of innovation, ABB today is writing the future of industrial digitalisation and driving the Energy and Fourth Industrial Revolutions. ABB operates in more than 100 countries with about 136,000 employees.

It is traded on the SIX Swiss Exchange in Zurich, Nasdaq Stockholm and the New York Stock Exchange in the USA.

ABB is the world’s largest builder of electricity grids and is active in many sectors. Its core businesses are in power and automation technologies. With a long history of growth through mergers and acquisitions, it entered a phase of structure unification since 2014. The company has one corporate division and four production divisions since reorganization in January 2017. ABB is one of the few large companies that have successfully implemented the matrix structure in their organization.

Meanwhile, the fourth Formula E season started in December 2017 with a couple of races in Hong Kong. Sam Bird (DS Virgin) won the first one while Felix Rosenqvist (Mahindra) triumphed in the second. The next round is on January 13th in Marrakesh (Morocco).

Audi now competes in the series with a factory team. BMW will join from season 5, while Mercedes has a place for season 6 alongside Porsche.

Verstappen: No regrets, but I just wish that we had a bit more horsepower

6 F1 and MotoGP drivers about their favourites, training and toughest opponents

Loeb: The Corsica roads are apparently faster than when I last competed here