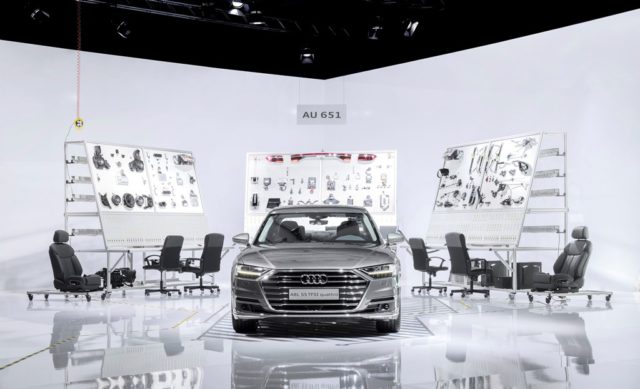 Audi is offering a glimpse into the complex research and development process for the new A8. The premium car brand is presenting the first-ever exhibit of the “Audi Motherboard” at Design Miami. The replica of an original test system from the Technical Development division illustrates the complexity of the luxury sedan.

The “Audi Motherboard” is a replica of a test system. Audi uses the system test vehicle components during various stages of development. The exhibit consists of three circuit boards that are roughly 3 meters by 3 meters (9.8 ft x 9.8 ft) in size. They show the control modules used by engineers to test the interaction between hardware and software functions prior to series production. This allows them to simulate things such as the immense exchange of data between the systems. Test stands of this type are normally located in the high-security zone of the Technical Development division.

It has a new design language, as well as an innovative touchscreen operating concept and 48-volt technology as the basis for the electrified drive.

“The Audi A8 is the world’s first production automobile for highly automated driving. We are demonstrating to our visitors in Miami how the model manages the complex situations in a traffic jam with technology,” said Bernhard Neumann, Head of Experiential Marketing at Audi. “With the help of the installation, we make it possible to experience the Audi A8 and the process of its development.”

Design Miami takes place December 5-10 in Miami, Florida (USA). Each year the event draws the most influential art collectors, gallery owners, designers, curators and critics from all over the world. Audi has been the exclusive automotive partner to the exhibition since 2006.

The best way to experience a city like a local: Get the perfect tour guide. #AudiA8 pic.twitter.com/MLUjcVG4WK

The Audi AI traffic jam pilot takes charge of driving in slow-moving traffic at up to 60 km/h (37.3 mph) on freeways and highways where a physical barrier separates the two carriageways. The AI button on the centre console activates the system.

Traffic jam pilot is capable of handling the full driving task – acceleration, steering and braking. In certain conditions, drivers can take their hands off the steering wheel until the car requires manual driver control again. This takeover request occurs before the system nears the limits of its capabilities.

From a technical perspective, the traffic jam pilot is revolutionary

During piloted driving, a central driver assistance controller (zFAS) now permanently computes an image of the surroundings by merging the sensor data. Audi is the first car manufacturer also to use a laser scanner. The introduction of the Audi AI traffic jam pilot means the statutory framework will need to be clarified in each individual market, along with the country-specific definition of the application and testing of the system. The brand’s high-quality standards are equally applicable in the realm of highly automated driving. In addition, a range of approval procedures and their corresponding timescales will need worldwide observation. Audi will, therefore, be adopting a step-by-step approach to the introduction of the traffic jam pilot in production models.

The Audi AI remote parking pilot and the Audi AI remote garage pilot autonomously steer the A8 into and out of a parking space or a garage, while the driver monitors the manoeuvre. The driver need not be sitting in the car. They start the appropriate system from their smartphone using the new myAudi app. They hold the Audi AI button pressed to watch a live display from the car’s 360-degree cameras on their device.

Tanak retired, Ogier in the lead in Rally GB