The record holder continued his winning streak in the BMW M Award: Marc Marquez was the fastest qualifier in the MotoGP once again in 2017, which saw him clinch the coveted award for the fifth time in a row. The Spaniard won the BMW M Award this season with a total of 343 points. He had a considerable advantage of 86 points over his closest rival Maverick Viñales.

This year, Marquez received the new BMW M4 CS as a reward for his qualifying performances. The official award ceremony was a part of the MotoGP finale in Valencia, Spain. Carmelo Ezpeleta, CEO of MotoGP promoter Dorna Sports, and Frank van Meel, President of BMW M GmbH presented the cat to Marquez.

In 2013, he became the first rookie ever to win this prestigious competition. Marquez repeated the success in 2014, and in 2015 became the first rider to win three back-to-back BMW M Awards. His fourth straight win in 2016 made him the sole record holder. This year he continued his historic success streak. 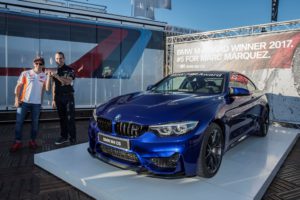 “I know just how much the BMW M Award is coveted among us MotoGP riders and that is why I am particularly proud to have won it for the fifth time in a row,” said Marc Marquez at the award ceremony in Valencia

“BMW M GmbH comes up with something special every year. And I’m really excited to be able to call the BMW M4 CS my own now. Incidentally, after five wins, my motivation is unwavering. My clear goal for next year is to win the BMW M Award for the sixth time!”

“The BMW Award has long been a firm and important part of the MotoGP,” commented Ezpeleta. “The long tradition of the BMW M Award also proves just how close and strong our partnership with BMW M is. It is fantastic that BMW M GmbH honours the performances of the best qualifier with such exclusive high-performance automobiles, as they did this year with the BMW M4 CS.”

“You can only take your hat off to Marc Marquez. He has been the fastest qualifier in the MotoGP since 2013, making him unbeaten in the BMW M Award. Congratulations on the fifth win in a row,” said Frank van Meel. “I’m sure that he will experience sheer driving pleasure with the new BMW M4 CS. Just as he did with his four winner’s cars from previous years. We are proud of this little milestone that we are celebrating today: the 15th presentation of the BMW M Award. It is very important to us to honour the performances of the MotoGP riders over the course of the season.”

As a long-standing partner of Dorna Sports, this season saw BMW M GmbH present the BMW M Award for the 15th time

Just like the points system for the races, riders at each Grand Prix weekend receive points relative to their positions in qualifying. The rider with the most points at the end of the season wins the BMW M Award in form of an exclusive BMW M car. Marc Marquez is the record holder with five wins in a row. Valentino Rossi and Casey Stoner both have three BMW M Awards to their name. Jorge Lorenzo has earned the title of top qualifier twice so far. Sete Gibernau and Nicky Hayden have both won once.

A perfect weekend for Audi in Berlin

Hamilton triumphs in Austin, trimmed the lead of Rosberg