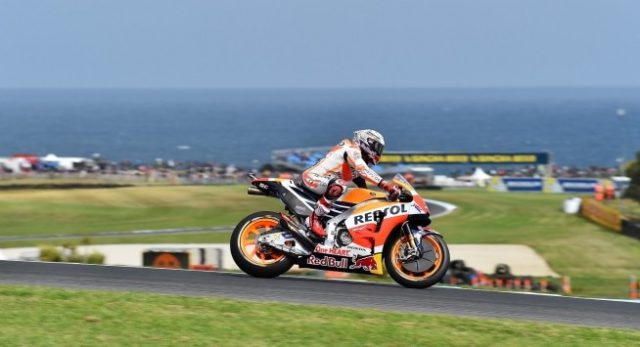 Marc Márquez put in a stunning lap to claim pole position for the Australian Grand Prix. While his title rival Andrea Dovizioso is only 11th.

Márquez laid down a marker with his first run. But he was overhauled by Johann Zarco and Maverick Viñales. As Yamaha flexed its muscles at Phillip Island.

Márquez, though, responded with a lap of 1:28.386, giving him a buffer of 0.333s over Viñales, as Zarco continued his strong rookie campaign with a front-row grid spot.

Dovizioso, meanwhile, was quicker only than Dani Pedrosa during the Q2 shootout, leaving the Ducati rider 11th on the grid.

Dovizioso had suffered a hefty crash under braking for Turn 10 during the short fourth practice session prior to qualifying, and subsequently was never a contender for pole position.

Pol Espargaró posted a late effort to claim sixth spot, with Bradley Smith negotiating his way through Q1 to register ninth, as the pair once again displayed KTM’s recent gains.

Valentino Rossi, who had to participate in Q1, took seventh position. The Friday pacesetter Aleix Espargaró was eighth for Aprilia.

Cal Crutchlow prospects came to a premature end when he crashed into Turn 4, leaving him 10th, ahead of the off-the-pace Dovizioso and Pedrosa.

Alex Rins was the quickest of those who was unable to secure passage from Q1 and will line-up from 13th position, in front of Tito Rabat and Karel Abraham.

Jorge Lorenzo’s disappointing weekend continued as he sprained his ankle in a crash during third practice, before going only sixth-fastest in Q1 – leaving him 16th on the grid – ahead of Loris Baz and Danilo Petrucci.

Conway, Kobayashi and Lopez on pole for Toyota at Silverstone

Alonso: It’s important to maintain good reliability if we are to maximise our potential