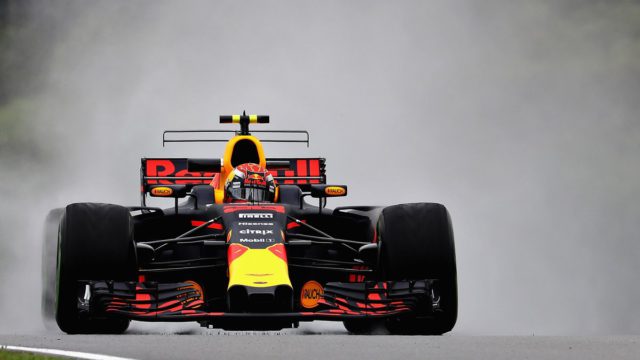 Max Verstappen led Daniel Ricciardo in Friday morning’s delayed, wet first practice session for the Malaysian Grand Prix at the Sepang circuit. Heavy rain in the build up to FP1 led to an “indefinite” delay to proceedings. Amid a break in the weather, the session went green at 11:30 local time, half an hour later than planned. Race control waited for the pools of water to clear from the track.

Verstappen and Ricciardo quickly got into a rhythm in the tricky conditions and on the switch from Wets to Intermediates.

Verstappen topped the timesheets at Sepang, clocking a 1:48.962, some eight-tenths faster than Ricciardo, who finished a similar margin clear of Alonso.

Kimi Räikkönen and Sebastian Vettel made late improvements to take fourth and fifth. The latter escaping from a trip through the grass and gravel at Turn 9. Mercedes made a low-key start to the weekend. Lewis Hamilton and Valtteri Bottas were sixth and seventh, ahead of Williams rookie Lance Stroll.

It’s still slippy out there

VET goes for a slide and ends up on the grass ?#MalaysiaGP ?? #FP1 pic.twitter.com/fGISsIjwzJ

Pierre Gasly, appearing as a Formula 1 race driver for the first time, made a confident start in ninth, his engineer praising his progress over the radio.

Renault test driver Sergey Sirotkin slotted ahead of regular Jolyon Palmer on the fringes of the top 10. He was followed by the other McLaren of Stoffel Vandoorne.

Haas brought up the rear, with Romain Grosjean and Friday runner Antonio Giovinazzi closely matched. Felipe Massa failed to post a time amid a hydraulics issue.

Neuville: We can look ahead to another season

Norris: Driving these cars does take a bit of time to get used to