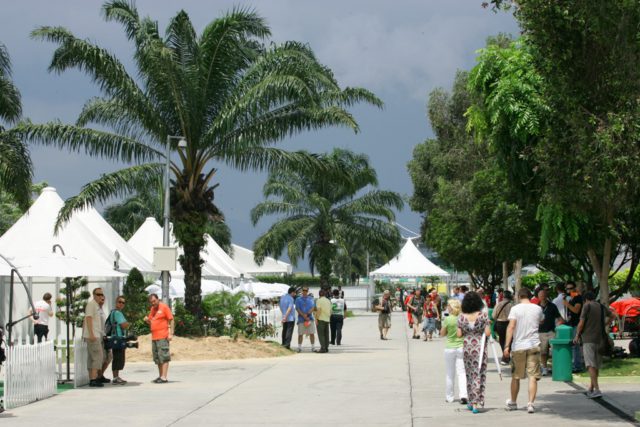 Few races test the physical fitness of the modern-day Formula One driver quite like the one in Malaysia. The 5.543 km Sepang International Circuit plays host to one of the most gruelling events on the calendar, with ambient temperatures averaging more than 30°C and humidity typically around 70%.

“Racing in Malaysia, it’s like being in a mild sauna,” says Valtteri Bottas. “We have all of our gear on – plus the helmet – and the car is hot as well. The seat itself is warm, and then we’re surrounded in the cockpit by the electrical boxes. It gets really hot.”

In Sepang, cockpit temperatures frequently hit numbers approaching 50°C. And for the driver – cocooned in a hot, stuffy, confined space, tightly packaged themselves in layers of fireproof Nomex and fighting extreme G-Forces on their body – it’s a serious test of physical fitness.

For this reason, many drivers tend to arrive in Malaysia as early as possible in an effort to acclimatise to the heat and the humidity.

“It takes three or four days to get your body used to the heat,” explains Valtteri. “You’ll start off with some training outside so that your body can sweat properly. We won’t be able to withstand the heat like a local – but those days of acclimatisation make a difference.” 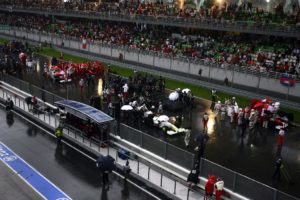 During a typical Malaysian Grand Prix, a driver’s heart rate can reach as high as 170 bpm, burning up to 1,500 calories and losing around three litres of body fluid in sweat. Over a 90 minute Grand Prix, that’s roughly 5% of their overall body weight, making hydration management crucial if they are to see off the threat of fatigue.

“One of the main things is to keep hydrated,” says Valtteri. “If you dip just once with your hydration, it takes a long time to get back on track. We have to drink lots of water as well as sports drinks containing electrolytes to keep the levels at the right place. You absolutely need to make sure you’re well hydrated.”

Many F1 drivers now wear a cooling vest pre-race while waiting on the grid to keep the harsh heat off them.

“The vest isn’t cold, it’s at a comfortable room temperature,” explains Valtteri. “It takes the heat off rather than cooling your body. Body temperature rockets during the race, but the vest helps you to keep it under control before the start. Even if the vest saves you just 0.4 degrees in body temperature before you set off, that’s 0.4 degrees you’ll save by the end of the race – it can make a difference.” 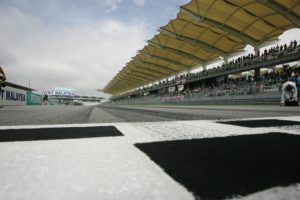 During the race itself, drivers rely on their in-car drinks bottle – filled with a mixture of sports drink and electrolytes – to replace lost fluids from sweat

It’s a battle against fatigue. And if there’s any race you don’t want your drinks bottle to fail, it’s Malaysia or Singapore…

“We sweat more than three litres during a race like Malaysia,” says Valtteri. “If we can’t replace that, it affects our focus. Fatigue sets in. It’s more difficult to be consistent and, in the very worst cases, you can develop cramps or even problems with your vision.”

Post-race, the immediate focus for the driver is on cooling their body and rehydrating. Those enticing bottles of water don’t last long in the cool-down room before the drivers hit the podium for the slightly sweeter taste of champagne!

And it’s not just the drivers that have to contend with the sweaty conditions. Working temperatures in the garage exceed 40°C in Sepang, with humidity often rising above 90%. It’s a double whammy, meaning increased sweat and a greater chance of dehydration.

The team – especially the mechanics, who have to suit up during pit stops – receive constant reminders to keep up their fluid levels, or risk dehydration. Long-haul flights, too, have a dehydrating effect, owing to the recirculated air. So, the battle for the team starts before they even hit the track, on the flight over to Kuala Lumpur.

For the Silver Arrows, Hintsa Performance are on hand to ensure the team are well educated on staying hydrated, so that everyone – from the drivers and management to the mechanics and garage technicians – arrive in the right state to go racing.

From the balance between staying active and relaxing at the right times outside of work to managing water consumption and hydration sachets during busy periods and even levels of exposure to bright light, there are a plenty of tricks of the trade to keep everyone on their feet. 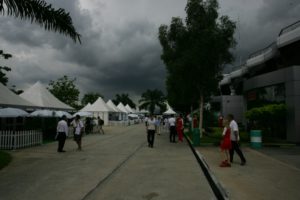 No matter where you turn in Formula One, performance optimisation isn’t far away

Handling the heat in Malaysia isn’t easy. But the men and women soldiering through the sweat will be doing all they can to stay cool as the title battle hots up in Sepang…

Hamilton to start the race from pit lane

Neuville leads after Day 1 in Portugal