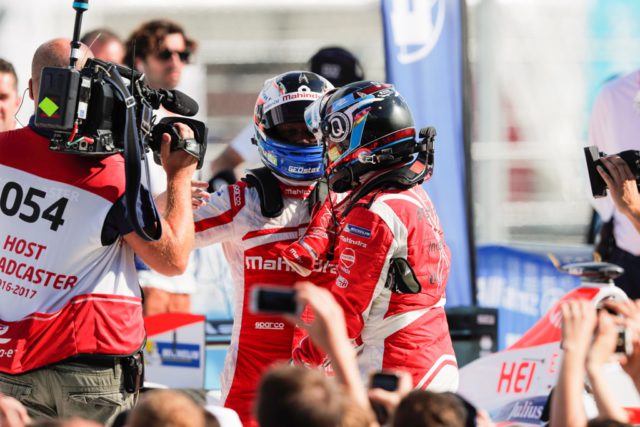 Mahindra Racing confirmed that Nick Heidfeld and Felix Rosenqvist will remain as the team’s race drivers for Formula E season four. It will run from December 2017 to July 2018.

Mahindra Racing has more ambitious objectives than ever before for season 4. The team wants to compete for the teams’ and drivers’ championship titles in Formula E.

The combination of Heidfeld and Rosenqvist has helped Mahindra enjoy its most competitive season to date in Formula E. The team secured third place in the teams’ and drivers’ championship in a thrilling season three finale at the Montreal ePrix in July this year.

Mahindra Racing claimed some impressive statistics during its third year in Formula E. The team took the most podiums of any team during the season. There was one win plus ten individual podiums, two fastest laps and three pole positions. Each driver had 5 podiums during last Formula E season.

Rosenqvist, meanwhile, will move into his sophomore season after a stunning maiden season. He took a maiden victory and three pole positions, becoming the Rookie of the Year and finishing third in the drivers’ standings.

“We’re thrilled that both Nick and Felix will remain with Mahindra Racing next season. With them, we’re confident that our new race car, the M4Electro will prove to be our strongest yet and Mahindra will consistently be fighting at the front of the field for wins and championships.”

“I am proud to be part of Mahindra Racing where we have been going from strength to strength in Formula-E. It’s exactly where I want to be. I am thrilled and can’t wait to compete in my M4-Electro in this ever-improving championship.”

“I’m thrilled to be back for a second season in Formula E and to extend my relationship with Mahindra Racing That was our mutual intention from the very beginning, and we’ve already completed a series of promising tests with the M4Electro in recent months. Moving into season four, I will draw on everything I learned in 2016-17 to try and lift us to the next level. It will be a massive challenge with stiff competition. But we have a solid foundation and are all fully committed to taking the fight to the very best.”

Friends reunited: from the classroom to Rally Poland 2017 with Taddy Blazuziak and Michal...

Magnussen: Even a small mistake can be very costly because everyone’s so close in...