Introduced to the Formula 1 calendar in 2008, the Singapore Grand prix was revolutionary with its intriguing combination of the night-time lights and public roads. At just over 5km, the Marina Bay circuit sweeps through the heart of the city and requires a high downforce package to combat the tight, often 90°, corners.

The #F1nightrace week is finally here! 5 days to #SingaporeGP ? pic.twitter.com/9D7gI4hEq8

The Marina Bay circuit has two short straights: the 500m pit straight and then the curved straight between turns five and seven, which shoots down Raffles Boulevard. This 700m straight is the only time the driver will get over the 300kph mark. Although kerbs are used extensively here, the majority are relatively flat.

The long lap and the high chance of a safety car makes Singapore one of the longest races on the calendar. The 2009 race was the shortest so far, at one hour and 56 minutes.

Fuel consumption in Singapore is high due to the stop-start nature of the track layout. Using the ICE alone, the engine would consume around 150kg of fuel over the race, but energy harvesting and employment has brought this down to under 105kg.

The drivers can lose up to 3kg of fluid during the race in the hot and humid atmosphere. This needs to be taken into account when setting the car weight before the race. 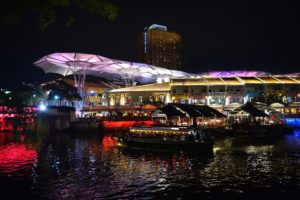 Singapore is one of the slowest circuits on the calendar, rating just above Monaco and Hungary in terms of the lowest average speed. With 23 corners, the average speed is around 175kph 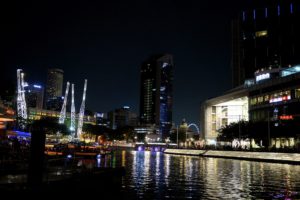 18 – According to research by the British Council, Singaporeans are the fastest walkers on earth. On average they walk 18 metres in 10.55 seconds or 6.15km an hour.

280 – Due to busy air traffic, buildings in Singapore can be no higher than 280 metres.

History lesson The Singapore Grand Prix celebrates its 10th anniversary this year. First run in 2008, the race takes place at night and sees the cars run through downtown Singapore under floodlights. It’s a breathtaking spectacle. But motor racing isn’t new to the city-state; there was a non-championship Singapore Grand Prix on the Thomson Road street circuit between 1961 and ’73 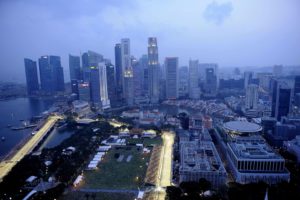 Getting there The sea freight, which includes a lot of garage equipment, arrived at the Marina Bay Circuit last week and the air freight arrived over the weekend. The mechanics arrived on Monday, with the engineers, management and drivers touching down later in the week

Surprising fact Singapore is one of only three city-states in the world, the others being Monaco and Vatican City

Local speciality There are many culinary delights in Singapore, one of which is carrot cake. However, this hawker staple is neither a cake nor made of carrot. It’s a white radish omelette, in which a gnocchi-like dough made from grated turnip, rice and tapioca flour is stir-fried with scrambled eggs and lots of garlic. Travel writers have described it as Singapore’s answer to a kebab, but no-one seems able to shed light on why it’s called carrot cake

Weather Hot and humid. Temperatures hover around 30 degrees in the day, with 80 per cent humidity. Thunderstorms occur regularly, but there has yet to be a wet Singapore Grand Prix 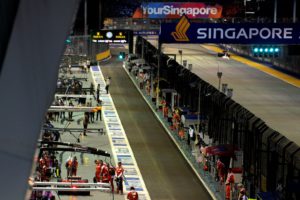 Tyre choice Purple Ultrasoft, red Supersoft and yellow Soft – the seventh time this combination has been used in 2017

Full throttle 47 per cent (highest of the season: Monza, 75 per cent). The longest period of uninterrupted full throttle is just 9s

Brakewear High. There are 16 braking events around the lap and few straights along which to cool the brakes

Fuel consumption 1.9kg per lap, which is relatively high and comes as a result of the stop-start nature of the track

ERS demands Medium. There are lots of demands on the ERS, but plenty of opportunities to harvest energy under braking 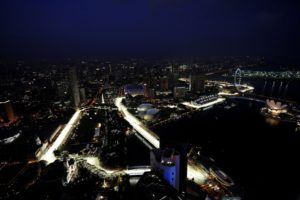 Grid advantage It’s a short dash to Turn One, but there’s a definite grip advantage on the racing line. With that in mind, pole position is located on the outside of the track

DRS There are two DRS zones, on the approaches to Turns One and Seven

Don’t put the kettle on… Qualifying is always spectacular under the lights and the start of the race is crucial because overtaking is difficult. A lot can be won and lost in the opening 200 metres/0.124 miles. The firework display as the cars take the chequered flag is something not to be missed either 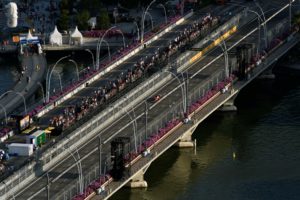 Safety Car likelihood 100 per cent. There has been at least one Safety Car period in every Singapore Grand Prix. It’s something that teams factor into their race strategies

Watch out for… Rain. This is the 10th Singapore Grand Prix and there has yet to be a wet race. Question marks about how the artificial lights affect visibility in spray will only be answered when there’s a wet race. Also, look out for the right-left chicane at Turns 20/21. The cars accelerate onto the start finish straight from here and the drivers are eager to get the power down early

The heat is on in the title race ??

Ricciardo: I love my ribs, my brisket and boy, they got nachos coming out...