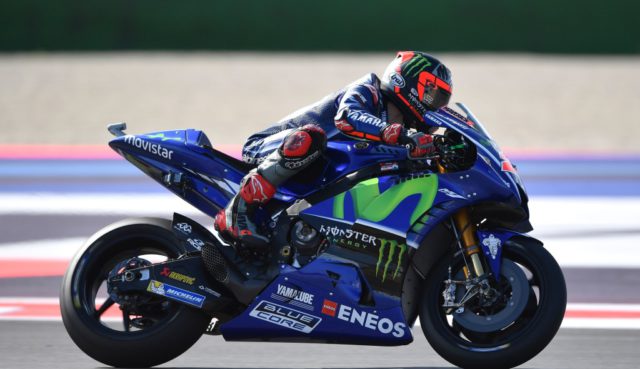 Vinales and Márquez battled for pole position at Misano, with Márquez holding the edge. Before both were overhauled by title leader Andrea Dovizioso, leaving the top trio covered by just 0.036s.

Márquez was on course to improve, as he chased his fifth straight pole, but crashed out at Turn 10, leaving Viñales free to surge to the front, clocking a 1:32.439, to finish 0.162s clear of Dovizioso.

It marked Vinales fourth pole position of the season, and first since June’s Italian Grand Prix, having hailed Movistar Yamaha’s progress with its 2018 prototype chassis.

Dovizioso, who made a minor gain on his final lap, will start from second position, while Márquez will round out the front row of the grid.

Dani Pedrosa set the benchmark early on but was never in contention. The rivals improved and ultimately he settled for seventh, ahead of Friday pacesetter Danilo Petrucci.

Aleix Espargaró put Aprilia on the third row of the grid by taking ninth. While Aspar pair Álvaro Bautista and Karel Abraham escaped Q1 to take 10th and 12th respectively.

Ducati wildcard rider Michele Pirro fell at Turn 6 en route to 11th spot. Héctor Barberá will start from 13th position. While both Jack Miller and Jonas Folger set times quick enough to make it to Q2. But their laps have been chalked off for exceeding track limits.

Miller was thus relegated to 14th; Folger, who had initially been quickest in Q1, was 16th spot.

Avintia’s Loris Baz split the penalised Miller and Folger, after lead KTM rider Pol Espargaró crashed through Turn 2. He ruined his chance of making an improvement, as he placed 17th.

The challenges of Rally Deutschland are even bigger in 2017