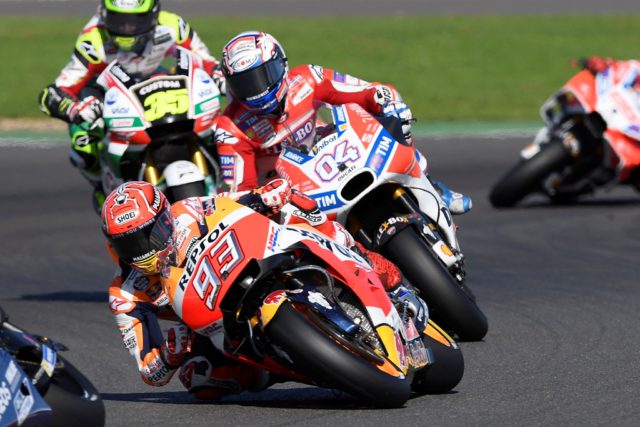 ,The British MotoGP Grand prix was a tough race for the Repsol Honda Team, with Marc Marquez forced to retire on lap 14 while fighting for the victory.

Marc was in the lead group from the beginning. He started well from pole position and he set a new race-lap record of 2:01.560min on lap 10. Then, while closely chasing eventual winner Andrea Dovizioso and Valentino Rossi, he suffered a problem with his bike’s engine. It was Marc’s first DNF caused by a technical failure since he entered the MotoGP class with the Repsol Honda Team in 2013. The engine will be returned to HRC in Japan for evaluation.

Dani Pedrosa managed to lap almost one second faster than his practice pace, despite struggling on the bumpy surface, but he wasn’t able to stick with front riders and ultimately matched his qualifying position with a seventh-place finish.

Marc is now a close second in the championship standings, 9 points behind Dovizioso. The 9 points Dani scored allow him to remain 35 points off the top in fifth place.

“The whole weekend has been quite difficult for us at this track. But the team tried to give me the best bike possible and I tried to do my best in the race. I really gave it my all and actually, my pace was better than in the practices. Almost one second faster compared to the rest of the weekend. Unfortunately, that wasn’t enough to stay with the front group, but I’ll take the positive part—the fact that we managed to improve a little. We have the same gap to the top in the Championship, so we’ll put this race behind us and work to be stronger and to fight at the front in the next races.”

“Today was really unlucky, as I was feeling very good on the bike and was there with the others, just trying to manage the race and tyres, especially the front as the temperature was higher than yesterday and I wanted to save it so to attack in the end. I had already seen that Dovi had something more than Viñales and Rossi, but I thought I could try and fight with him. So, everything was going well when I suddenly had a problem with the engine at the end of the straight.”

“It’s a shame of course but that’s something that can happen in racing, and it was the first time for me with Honda. The positives are that we were fast here, as we have been at other tracks, and that we’re still there in the Championship. Zero points today, but I’m still feeling good with the bike and am looking forward to the next races.”

Joan Barreda: Victory in Merzouga with sights now set on the Dakar 2019