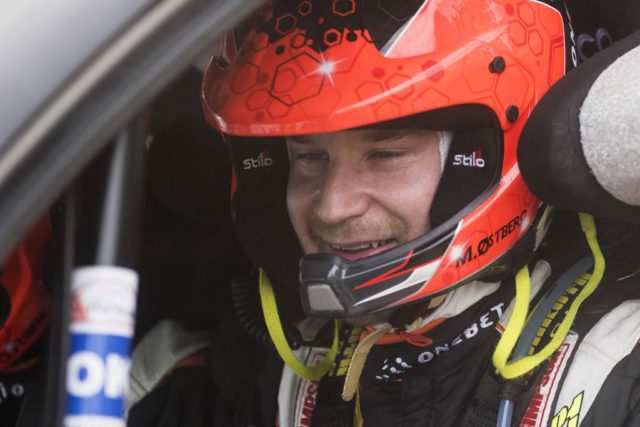 Mads Østberg dropped ADAC Rallye Deutschland from his calendar. It was planned he would drive in the WRC2-class with his Ford Fiesta R5. The Norwegian privateer ran the R5-car in the polish ERC-event Rally Rzezow but had to withdraw with technical issues.

Mads Østberg and Swedish co-driver Patrick Barth led the rally in Poland after a few stages. But then the power steering broke without warning on a fast stretch of a stage. The team did not manage to solve the problems with the steering and Mads had no other choice than to withdraw from the event.

“It was scary because it happened suddenly when we went into a very fast corner. Without the power assistance, the steering effectively became almost locked, and I just about managed to wrestle the car through the corner in nearly 180 km/h. We didn’t manage to fix the steering and had to withdraw”, Mads says.

Østberg was fastest on several stages in Poland, but the team was not able to solve the technical issues and decided to retire. This is also the reason why Mads is not running in Germany.

“Our R5-car is an older version, actually two generations older than the current versions running in WRC2. We can update mechanicals. But there will be issues with the software that we can’t change on such short notice. We cannot control 100 percent that this will not happen again, until we have further updates. We have chosen not to start in Germany”, Mads said.

Rally Germany was originally part of that. Torstein Eriksen did the co-driving duties in Rally Finland, while Patrick Barth partnered Mads in Poland. Then it was planned that Emil Axelsson from Sweden would sit beside him in Germany.

“Torstein did a great job in Finland and Patrick delivered on the stages we drove in Poland. Emil was the third candidate, and now we must find another solution to continue the evaluation process. The three guys are all possible candidates for a permanent seat”, the Norwegian driver explained.

Mads will have time though, as the championship takes a six-week break after Rally Germany. The next event is Rally Catalunya in Spain, but not before the first weekend of October.

Magnussen: I immediately felt happy in the car