Hyundai Motorsport completed Rally Finland with sixth and ninth position – taken respectively by Thierry Neuville and Dani Sordo. Neuville took 8 points plus 3 bonus points for his third time in the Power stage. They were vital for him as he moved to the lead of Drivers’ championship with 160 points. Sebastien Ogier also has 160 points but the Belgian has more wins.

Although the challenging weekend brought their run of six consecutive podium results to an end, Neuville and co-driver Nicolas Gilsoul continued their unbroken streak of Power Stage points this season

A strong run in the second Oittila stage saw Neuville achieve his pre-event aim of outscoring Ogier, and moving onto equal points with the reigning Champion.

Neuville said: “We set out to score more than Ogier, and we were able to achieve that. We had a very difficult weekend so to salvage some points is crucial. The Power Stage was a key moment, as we scored three vital extra points to move to the top of the Championship. This levels the playing field with four events left of the season, so it has been an important result. We know everyone is pushing hard to keep us in contention, so we have to put this complicated rally behind us and look forward to Germany, the team’s home event, where we know from the past that we can perform well.” 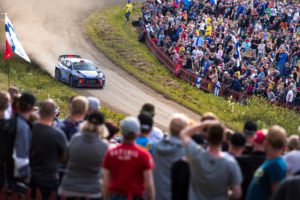 There are few positives for Sordo and co-driver Marc Martí to take away from Finland, as the Spanish crew struggled to ninth overall

They will look forward to a return to tarmac at Rallye Deutschland, where they have historically performed well.

Sordo said: “I am relieved that this rally is over. I have never had the right feeling all weekend, and on these fast roads you need to be fully committed to perform at the highest level. It has been complicated, not only for me but also for the team, so we have to put this behind us and look forward to the next event. We cannot let this weekend affect us; we need to stay concentrated and push flat out for victory in Germany!” 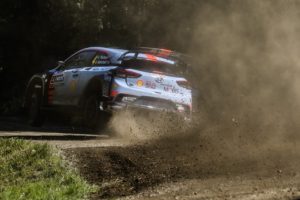 After two retirements on successive days in Finland, Paddon and co-driver Seb Marshall re-joined under Rally 2 on Sunday morning

The pair picked up from where they were cruelly forced to leave on Saturday, registering top-six stage times.

Paddon said: “It has been one of those weekends for us. After our retirements on Friday and Saturday, we wanted to approach the final stages in a positive manner and to get some time behind the wheel. This rally has perfectly illustrated our season, where anything that can go wrong does go wrong. The Power Stage was another example. Then the car unexpectedly went straight on at a third gear corner. Still, we got to the end of the rally. And I am sure, one day in the future, we will look back and laugh at our bad luck this year. I am sure we could have fought for the podium, and that is the positive that we will take away.”

Rally Finland has never been a strong event for Hyundai Motorsport, and 2017 has continued that trend

The team did not match its rivals on the Finnish stages, which require utmost precision and commitment from the crews.

“We expected this rally to be more difficult than others. But we never thought we would be missing so much pace compared to our competitors. All in all, we are disappointed, as we could not reach our pre-rally objective to step on the podium. We have some work to do on this specific terrain. But we can now focus on the next two events, which should be better suited to the Hyundai i20 Coupe WRC.”

“On a positive note, Thierry has managed to pick some very important points. He has now taken the lead of the Championship. This sets things up for a very exciting final four events. Finally, we send our congratulations to Esapekka Lappi for his debut WRC victory, and to everyone at Toyota for a great home result.”

The car was fabulous all weekend, Neuville says after his Portugal win

Paddy Lowe: Coming back to the paddock has that feeling of being “back to...

Marquez: That was the best way to seal the Constructors Championship