One of the season’s flagship events, Rally Finland more than lived up to expectations, serving up a breathtaking spectacle in the land of a thousand lakes. All three of the Citroen C3 WRCs made it to the finish. Craig Breen and Scott Martin secured the team’s best result with fifth place, after a rally that was largely dominated by Finnish cars and drivers. Kris Meeke was eighth.

For the first time this season, a C3 WRC set the fastest time in the shakedown

Kris Meeke topped the timesheets on the Ruuhimäki stage. Lacking confidence, he fell off the pace later and then lost further time after bending his steering when he hit a rock on Friday.

At the same time, Craig Breen earned his spurs as the Flying Irishman. Having moved into third position after SS2, he then showed an impressive level of consistency. Despite a set-up and pace notes that might have been better in places, he held onto a top five spot, along with four Finnish drivers!

During the Saturday morning loop, the Citroen drivers were surprised by the level of grip, which was much lower than on Friday. The best performance was recorded by Meeke, who set the fourth fastest time on Ouninpohja 2. On the final speed test of the day, the Ulsterman lost a minute after picking up a puncture and the tyre then exploding, which ripped off part of the bodywork.

Sunday’s leg featured just four short stages. With clear gaps between the competitors, the Citroen drivers opted to make sure of their positions. After that team principal Yves Matton summarized their and the team’s performance. 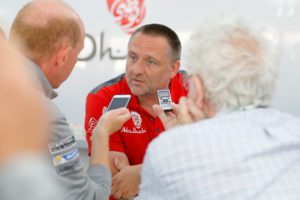 How would you assess the weekend at Rally Finland?

“I think we showed that the Citroen C3 WRC is continuing to move in the right direction. Kris Meeke set some good times, especially at the start of the rally with the fastest time in the shakedown, and the second best time on SS2… After that, he really struggled to match the pace of the leaders and we knew that here, this sort of situation would lead to him dropping down the standings. It’s a bit of a vicious circle: the car no longer works like it should and it’s then difficult to come back. He therefore ended up spending pretty much the entire weekend behind Craig Breen, who had a very good race. For the fifth time this season, he finished fifth. Above all, he was the leading ‘non-Finnish driver’ for the majority of the weekend.” 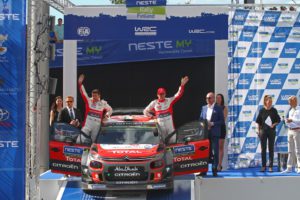 “We saw that weekend that the local drivers were in total control. The data gathered throughout these three days of racing confirmed the areas in which we must continue to focus our efforts. We know that the car is more or less effective depending on the surfaces and the conditions. The window in which the C3 WRC works efficiently is getting bigger, but we still have some work to do.”

Can you now say whether reshuffling the crews for Rally Poland was the right thing to do?

“For Finland, Kris had the right approach: when he realised that couldn’t challenge for the win, he accepted it and managed his pace to make sure he completed all of the stages and set some good times when the conditions were favourable. The experience acquired is just as useful for him as it is for our engineers. To some extent, we’ve gone back to basics.”

In three weeks, the WRC returns to tarmac in Germany. Can you tell us what your expectations are for this tenth round?

“Having won it eleven times since 2002, the ADAC Rallye Deutschland is undoubtedly Citroen’s favourite event. At the Tour de Corse, we had dominated at the start of the rally before Kris had a mechanical issue. We’ll therefore be determined to turn it around in Germany, but our approach will remain sensible. The roads in Corsica and Germany have little in common with each other and we know that our rivals have been doing a lot of work over the last few months. As previously announced, Kris Meeke, Craig Breen and Andreas Mikkelsen will driving the three C3 WRCs entered for the rally.”

Before that, Sébastien Loeb will be driving a C3 WRC during a day of testing. What is the significance of this event?

“It’s something that I had been thinking about for a little while and which has been made possible by the creation of the PSA Motorsport entity. There is a shared desire and interest in conducting this test. As far as we are concerned, we’ll be getting feedback from the greatest rally driver of all time. As for Seb, he will be able to satisfy his curiosity and drive the latest generation of World Rally Car.”

Bird: There’s no reason why we can’t come away with another strong result

70 years of sports cars at Porsche