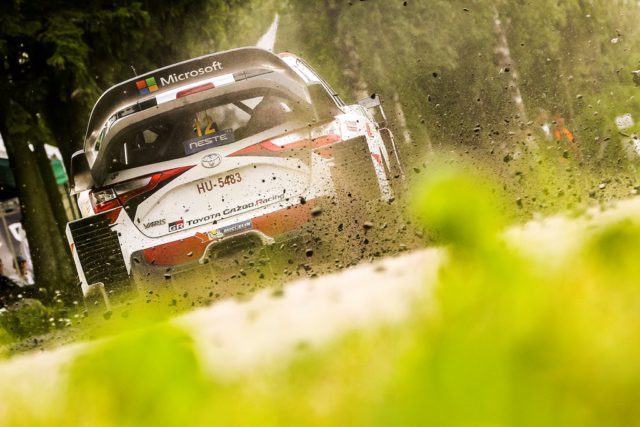 Novice Lappi, driving for only the fourth time at the WRC’s top level, won Rally Finland by 36.0sec in a Toyota Yaris.

The 26-year-old overcame a late scare after breaking a wheel in the penultimate speed test to claim an emotional victory on home ground. It was a sweet success for his locally-based Toyota team, its second win after returning to the WRC this year.

Thierry Neuville’s sixth place dislodged Sébastien Ogier from the championship lead. They are level on points, but the Belgian leads on a tie-break after Ogier crashed out.

Lappi, who became the sixth different driver to win in nine rounds, fought with experienced team-mate Jari-Matti Latvala for most of the four-day, dirt round encounter. Latvala retired from the lead on Saturday afternoon when his car’s electronic control unit failed.

Carrying a 49.1sec advantage into today’s short final leg, Lappi measured his pace through the final four tests, keeping his cool when he wrecked his car’s rear left wheel after running wide.

“I’m on my home soil so I should have been strong here and I was, but a victory was beyond my dreams. I have to really say a big thanks to the team because they built such a fast car in such a short time.”

Elfyn Evans won a thrilling three-car fight for second to match his career-best result. The Welshman started the final day in fourth in a Ford Fiesta behind Teemu Suninen and Juho Hänninen.

The trio swapped places in every test before Evans overhauled Hänninen in the final kilometres to secure the runners-up spot by 0.3sec. Third was Hanninen’s first WRC podium and brought further delight to Toyota.

Suninen held a slender second until crashing his Fiesta in the penultimate test. He finished fourth, 25.2sec behind Hänninen, a remarkable result for the 23-year-old Finn in only his second World Rally Car drive.

The ever-consistent Craig Breen was the leading Citroën driver in fifth. The Irishman headed Neuville by 10.5sec, despite often struggling for confidence in his ill-handling C3. Neuville rarely looked like finding the pace which has netted three wins and six consecutive podiums.

The series returns to asphalt next month for the first time since April at ADAC Rallye Deutschland (17 – 20 August).