Two-time World Champion Marcus Gronholm reckons Sebastien Ogier might be feeling the pressure from this year’s title battle after yesterday’s crash. The French driver will not restart today as co-driver Julien Ingrassia is not in optimal shape after the impact in the trees.

“I think Sebastien could be beginning to feel the pressure a little bit,” says Marcus. “Maybe he’s not quite as comfortable as he was in the Volkswagen. For Hyundai and Thierry Neuville, this is a massive opportunity. They know that they can get good points here but there’s also still a very long way to go. I don’t think we’ve seen the last big surprise on Rally Finland yet.” 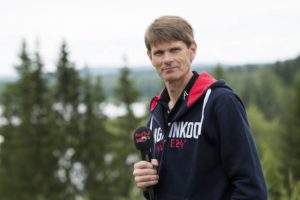 “I think Sebastien could be beginning to feel the pressure a little bit,” says Gronholm. “Maybe he’s not quite as comfortable as he was in the Volkswagen”

Citroen also faces a moment of truth. Kris Meeke, returning to action, says that he isn’t driving at full confidence after being substituted on the last round in Poland. But some of the changes he wanted made are beginning to happen, with new parts on the car and the arrival of nine-time world rally champion Sebastien Loeb as an occasional test driver. With Citroen giving up on securing any championships this year, they are gunning for individual rally victories. Starting right now, with Craig Breen in the thick of the podium fight. Yet it’s the Toyota team currently in front of their home rally, with Jari-Matti Latvala and Esapekka Lappi quickest so far.

“I’ve driven the Toyota here and now I can really understand why,” says Gronholm. “In fact, I was asked not to talk about any details of the car, but I can say that it’s very good. If they continue like this, they stand a good chance of winning here, especially now that Ott Tanak has lost time with a puncture, who I thought would be at the front. Finland is the sort of rally where if you lose a bit of time, it’s nearly impossible to get it back. I reckon we could see some changes in the championship. And I’m looking forward to finding out what happens next.”

Fernando Alonso to race at Indy 500 with McLaren, Honda and Andretti Autosport

Renault: The manufacturing plant of the future