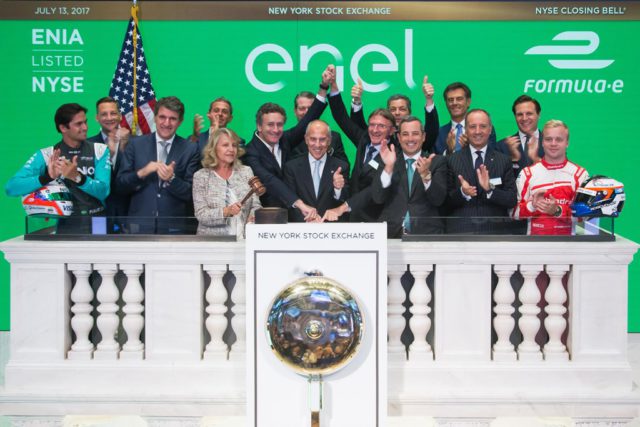 The FIA Formula E Championship is joining forces with Enel to offset the emissions of the inaugural race in New York. That would make it the first-ever zero-emission event in the championship’s history.

The group participated in the closing bell ceremony. After that, all of them posed for photos on the balcony above the trading floors on Wall Street. Some of the stars of Formula E were also present. The first-ever Formula E champion and NextEV NIO driver Nelson Piquet Jr. and Berlin ePrix race winner Felix Rosenqvist for Mahindra Racing were among them.

Enel is Official Power Partner of Formula E. The company is contributing to limit the emissions associated with staging and powering Formula E events. In addition to innovative clean energy generation, storage and management solutions, Enel will entirely offset the emissions of the event in New York through green certificates from its portfolio of renewable energy plants.

The FIA Formula E Championship is joining forces with Enel to offset the emissions of the inaugural race in New York. That would make it the first-ever zero-emission event in the championship’s history

The wind turbines at Stipa Nayaa prevent the emission of over 133,000 tonnes of CO2 per year. That is the equivalent of taking 26,000 cars off the road.

Formula E also works in collaboration with the FIA and DHL to comprise a calendar which requires reduced air freight transportation to each venue. DHL is a frontrunner in environmentally sustainable logistics. The logistics company announced earlier this year its commitment to zero-emissions operations by the year 2050.

The equipment for the race in New York was safely delivered to the USA by DHL leveraging its ocean freight expertise. That produces 100-times less CO2 emissions than transporting the same cargo via air.

“It was an honour to be invited to join the closing bell ceremony at the New York Stock Exchange. Formula E isn’t just making history with the first-ever race in New York. But [also] the first zero-emission event in the history of the series. Both Enel and DHL share the same common vision and goal to make Formula E carbon neutral by 2020. The future is electric.”

“We are proud to play a part in such an historic event today at the NYSE. Enel and Formula E are natural partners, as we both embrace the exciting opportunities in electric mobility, smart cities and the clean energy revolution. Just as Formula E further pushes the boundaries of technology race after race, we at Enel strive every day for a greater penetration of electricity in society and for its full decarbonisation.”

Lewis Hamilton: It was the rawest fight that I can remember having in a...

Raikkonen: The pressure we have here in Monza is the same that we have...

Double victory for Ferrari in Monaco