Hyundai Motorsport registered its third victory of the 2017 FIA World Rally Championship (WRC) with Thierry Neuville and Hayden Paddon securing the team’s first 1-2 in WRC since Rallye Deutschland 2014. Dani Sordo completed the rally in fourth place overall, making it the most successful combined result for the team in its history. Neuville’s win represents the sixth overall WRC victory for Hyundai since 2014, as well as the seventh double podium for the team.

Heading into Sunday’s final four tests all eyes were on the intense battle between Neuville and M-Sport’s Ott Tanak. After swapping the lead four times throughout Saturday, Neuville initially lost his advantage on Sunday’s first run through SS20 (Orzysz 1), but it was all change on SS21 (Paprotki 1) after а mid-stage incident forced the Estonian out of the rally.

Neuville, meanwhile, not knowing about Tanak’s issue, pushed hard to regain his lead and emerged from that stage with а one minute advantage from his teammate Hayden Paddon, who took second as а result of Ott’s trouble.

From there, it was а focused and measured final two stages with no risks taken to secure the 1-2 result. Neuville was also able to pick up an extra point in the final stage.

Hyundai Motorsport set out а clear intention for а strong team result in Rally Poland. А 1-2-4 finish not only achieves that objective but also in the process set а new benchmark for the team in terms of its best-ever combined result 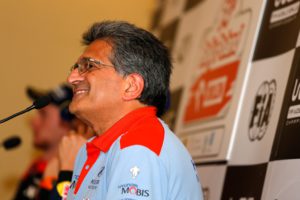 “This is а really important result for us as а team, especially in terms of our championship objectives”, Team Principal Michel Nandan commented.

“More than that, though, it shows what we сап achieve as а team when we are on top of our game. Everyone has performed fantastically and this result is for all of our employees in Alzenau. Congratulations to Thierry and Nicolas [Gilsoul] on their third victory of the season, and to Hayden and Seb [Marshall] for their first podium as a crew. With Dani and Marc [Marti] also not far off in fourth, we have had a good weekend. Of course, we were sorry to see Ott retire from the rally after what had been an epic battle. WRC is in great health with such a high level of competition, and we are honoured to be playing our part”, Nandan concluded.

What a fantastic weekend! Thank you everyone! ?? #WRC #RallyPoland #TeamEffort pic.twitter.com/8sQpnWJwCb

Ricciardo: I have done half the job I came here to do