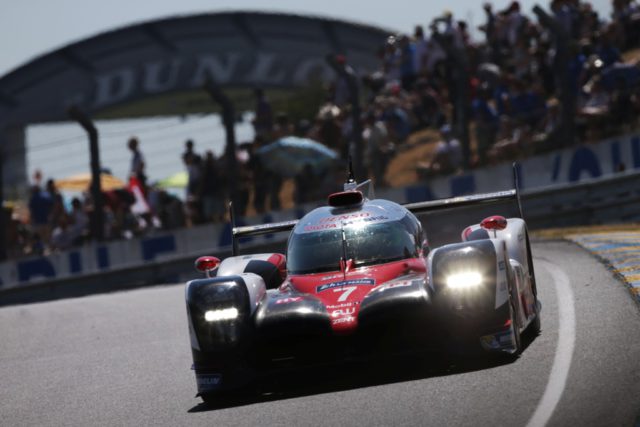 Toyota retained the lead of the 24 Hours of Le Mans as the 85th edition of the race moved into its evening stage.

Pole position setter Kamui Kobayashi successfully completed his first stints behind the wheel, extending the lead over the #1 Porsche to more than half a minute for the #7 TS050 HYBRID he shares with Mike Conway and Stéphane Sarrazin.

“The stint went well. At the beginning, the traffic worked out okay for me but later that became more of a problem. But I could extend the lead and it looks positive so far. We are calm and the car feels good, as you can see by the lap times”, Kamui Kobayashi said.

Anthony Davidson in the #8 he drives along with Sébastien Buemi and Kazuki Nakajima dropped to the third position after losing time due to a local slow zone, when cars must drive significantly slower than racing speeds.

“It was a really tough three stints. I just seemed to get all the bad luck in the traffic. My fastest lap times were competitive so the speed was there but I was just catching cars in the wrong places. Then I was unlucky to be the only leading car to pick up one of the slow zones, which cost me 30 seconds. The car was running well and feels good”, Anthony Davidson commented.

José María López performed impressively in his first racing stints at Le Mans and moved up to the fourth position, helped by a technical problem for the #2 Porsche, which lost a lot of time in the pits.

After the second driver changes, Stéphane took over the leading #7, with Kazuki at the wheel of the #8. Yuji took over the #9 for his first racing laps of the Circuit de la Sarthe.

“First of all, I was really happy to complete my first stint ever at Le Mans. I was feeling more and more comfortable all the way through and it went quite well. It’s a very long race and we are still there. I am looking forward to jumping in the car again”, López said.