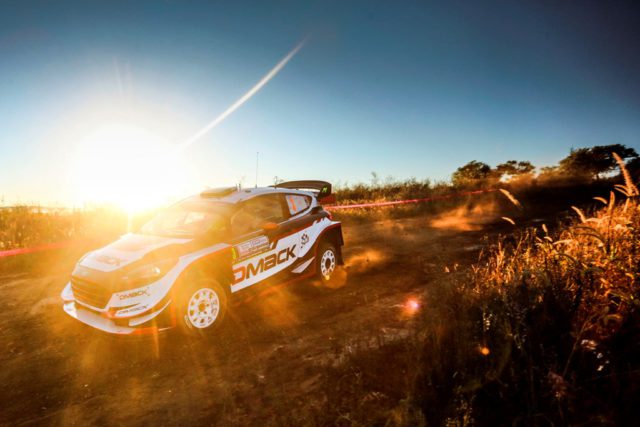 After coming so close to a maiden FIA World Rally Championship victory at last month’s Rally Argentina, Elfyn Evans and Daniel Barritt will be aiming for a similarly strong showing at Rally de Portugal.

The pairing missed out on victory by the cruellest of margins – just 0.7 seconds – but came away with renewed confidence which should hold them in good stead this weekend.

Evans contested the Portuguese event on five previous occasions. He has good knowledge of the rally but it remains the chink in his armour having never secured a points-scoring finish.

This year the Welshman will be keen to put that right and, if his impressive performance in Argentina is anything to go by, another strong result could well be on the cards.

Elfyn Evans: “After coming so close to victory in Argentina, our confidence is high and I think we’re in a good position to deliver a strong result”

“We’ve always had pretty good pace in Portugal. But for various reasons we’ve not been able to translate that into a strong result. After coming so close to victory in Argentina, our confidence is high. And I think we’re in a good position to deliver a strong result”, Elfyn Evans said.

“The whole package worked really well in Argentina and the hope will be to continue that in Portugal. A lot will depend on the weather. But the surface isn’t too dissimilar and the soft roads have the potential to become quite rough and with ruts over the second pass.”

“If we’re to challenge for another strong result we’re going to have to be at the top of our game. We’ll need to get into a good rhythm early on and find our confidence through the stages. If we can do that, anything is possible.”

WRC TV recce of the Friday stages of @rallydeportugal pic.twitter.com/6fIpSYfV5G

Dakar dream over for Bryce Menzies

Fired up for cold racing: Audi at GP Ice Race in Austria