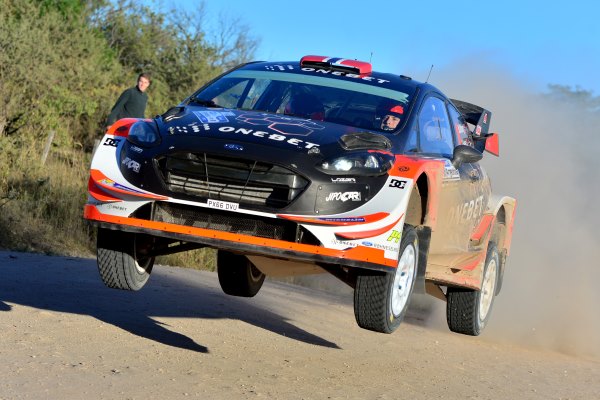 Privateer Mads Østberg and codriver Ola Fløene (Ford Fiesta WRC) plan to continue challenging the factory teams in Rally Portugal . After dropping Mexico and Corsica from his WRC schedule, Mads came back with a strong performance in Argentina three weeks ago.

“I think there were quite a few among the factory guys taken by a bit of surprise by our speed especially the first day in Argentina. We had found a good setup for the car, despite limited testing, and I felt confident and motivated. I have the same feeling before Portugal and aim to fight for top positions”, Mads Østberg said.

As a privateer Østberg can test during the last days at the overseas events, while factory teams do not have that right. The team used this chance to get a couple of hours driving together with some argentinian drivers on the Monday before the rally. Mads only managed to do a few testruns, but when the factory teams noted how competitive he was in the rally, they sent the FIA  a complaint.

“I found the situation funny to be honest. And really can’t do nothing else than to take this as a compliment”, the Norwegian commented.

Mads did a guest appearance in the Norwegian championship Rally Sørland event in his Ford Fiesta R5 a week ago. He won convincingly with a solid margin against tough competition from a strong field with WRC2 frontrunners Veiby, Brynildsen and Grøndal.

“The R5 Fiesta is very different from the WRC-car and demands a totally different driving style. Still I had the chance to push really hard on technically demanding gravel roads and got some very positive answers regarding my speed”, he says.

Mads Østberg: “I think there were quite a few among the factory guys taken by a bit of surprise by our speed especially the first day in Argentina”

The 29-year-old Norwegian did a test in Portugal, mainly concentrating on differential set-up. The roads there have quite similar character, especially when it comes to a rocky and rough surface. Østberg wants to run the same suspension set-up as he did in Argentina.

“I had to adapt my driving style back to the WRC-car after running the R5 Fiesta in Norway. But soon found the rhythm again. I am really looking forward to the rally here in Portugal. It’s a classical and very demanding rally and the atmosphere with all the spectators is brilliant.”

Hamilton on pole at Sepang, Vettel at the back

Bottas: I couldn’t be happier to end the season like this