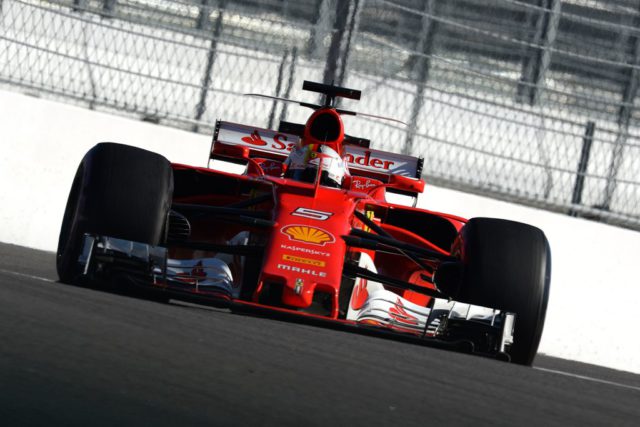 Ferrari occupied the first grid row for the Russian Grand prix, fourth round of the 2017 Formula 1 World Championship. Sebastian Vettel will start from poleposition, while his teammate Kimi Raikkonen will be next to him. Their big rivals, Mercedes’ Valtteri Bottas and Lewis Hamilton, were third and fourth.

The weather was still magnificent – sunny, 21 degrees of the air, 40 on the track. Tires were a key factor in the session, as previous sessions have shown that some teams (including Mercedes) have difficulty keeping them in their working window.

In Q1 Bottas (ultrasoft) first of the favorites came out on the track, followed by Vettel and Raikkonen – both of them with supersoft. Hamilton, as well as his teammate, was with the softest tires available for the weekend.

5 minutes before the end of Q1 in the relegation zone were two McLarens, the two Saubers and Romain Grosjean. By the end of the segment only Fernando Alonso had qualified for Q2 at the expense of Jolyon Palmer, who hit the barrier of the fourth turn. At the same time, Pascal Wehrlein suffered a crash.

At the beginning of Q2 the marshals still worked on Palmer’s car relocation, so there were yellow warning flags in the sector. Bottas was again the first of the favorites on the track, again with ultrasoft. Ferrari did not take any risks and Vettel also came out with the softest tires, as did Raikkonen. Kimi stood at the top with 1:34.053. Bottas took down 0.789 seconds of that (1:33.264) and Hamilton stayed almost half a second (0.496 seconds) from his teammate. Vettel was third.

In Q3, the Mercedes drivers did not waste time and set off immediately. Everyone was on ultrasofts. Nico Hülkenberg stubbornly refused to let Hamilton go in front of him. Lewis also tried to get ahead of Renault’s driver, but failed.

The tension was enormous before the final attempts. This time Raikkonen led the Ferrari-Mercedes battle. The Finn recorded 1:33.713 and did not improve his time. Vettel was faster than him with 0.059 seconds! Bottas and Hamilton remained third and fourth.

Hamilton on poleposition in Australia

McLaren looks to the future with Ultimate Vision Gran Turismo