Lewis Hamilton was quickest on Friday, after set the top of the times during the second free practice session for the Malaysian Grand Prix. He beats his team-mate Nico Rosberg by 0.233 sek. The world champion produced a best time of 1:34.944 min on the soft tyre. The Ferrari drivers were 3rd an 4th, but still off the pace of the Mercedes.

Vettel was six tenths adrift, while Raikkonen 9th. The fin was complaining of set-up problems. Max Verstappen was 5th for Red Bull, followed by Sergio Perez and Fernando Alonso in Force India and McLaren-Honda respectively. The Spaniard was very fast with the upgraded power unit of the Japanese manufacturer.

That was a good day today,” said Hamilton after the end of the day. –  No issues to report and we got through our run plans in both sessions. There’s a lot of data to analyse to make sure we have a good understanding of the tyres and of our position relative to the others. Overall a good building block for the rest of the weekend.”

Daniel Ricciardo, Nico Hülkenberg and Jenson Button, who is not running the updated Honda engine, rounded out the top 10. Button was also held up by a slow-moving Kevin Magnussen on his best run, after which he gesticulated at the Renault driver.

The last has a big moment in FP1. The Dane was returning from an installation lap when the fire started. Kevin car caught on flames in the pit lane. As fuel leaked out of the engine cover, mechanics fitted a pipe in a bid to drain it, but the car repeatedly set alight. So Magnussen had to jump quickly out of the car with no injuries. 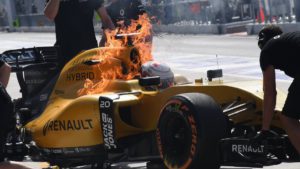 When asked if the outcome could have been a different if the car was fitted with a Halo, Magnussen said: “Possibly. I’ve never run the Halo so I’m not the best person to ask. But maybe you can ask some of the guys who have run it – and see if we can still get out as quick. In my opinion, 5 seconds is too long if the car is on fire. And you don’t want to take 5 seconds.”

Carlos Sainz Jr. and Jolyon Palmer held top 10 positions for most of the session. But agter that they slipped back to 11th and 12th. Williams had another bad  key session. Valtteri Bottas and Felipe Massa were back in 13th and 15th, split by Esteban Gutiérrez Haas.